An illustrated lecture by Canon David Nason on January 21st 2021 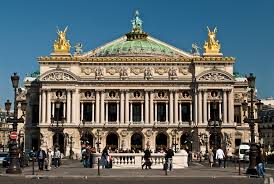 Paris was the undoubted centre of European opera in the 19th Century.   This lecture will explore the development of opera in Paris during that period; the operas performed; the composers who wrote them and the magnificent theatres in which they were presented.  There will be musical highlights from Bizet’s ‘Carmen’, ‘Orpheus in the Underworld’ by Offenbach and Gounod’s ‘Faust’ amongst others